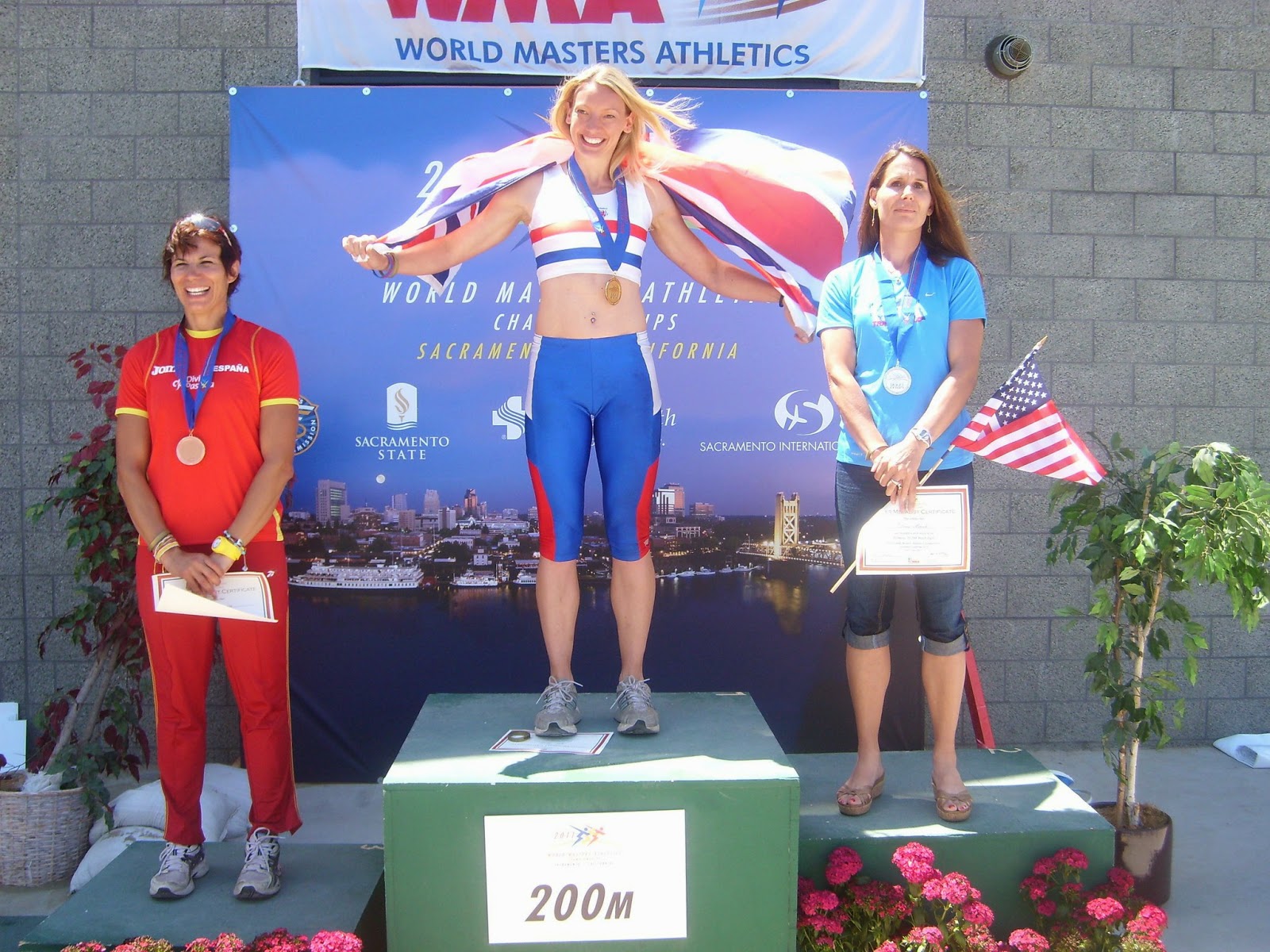 Since 2011 I have competed in Masters Athletics. I'm a sprinter, I started training when I was 15 - and the highlight of my athletics career was a bronze at University  Indoor Championships 1996. I stopped competing after i left university, despite having made Personal Bests that year. I was busy starting work, doing courses etc. I never stopped training though and I then got into bobsleigh in 2006. I competed for 4 years in Bobsleigh, but at 35, in 2001 I switched back to racing on the track and i loved it!

The Masters circuit is very competitive, but the atmosphere is great- I've made so many new friends, through the sport. 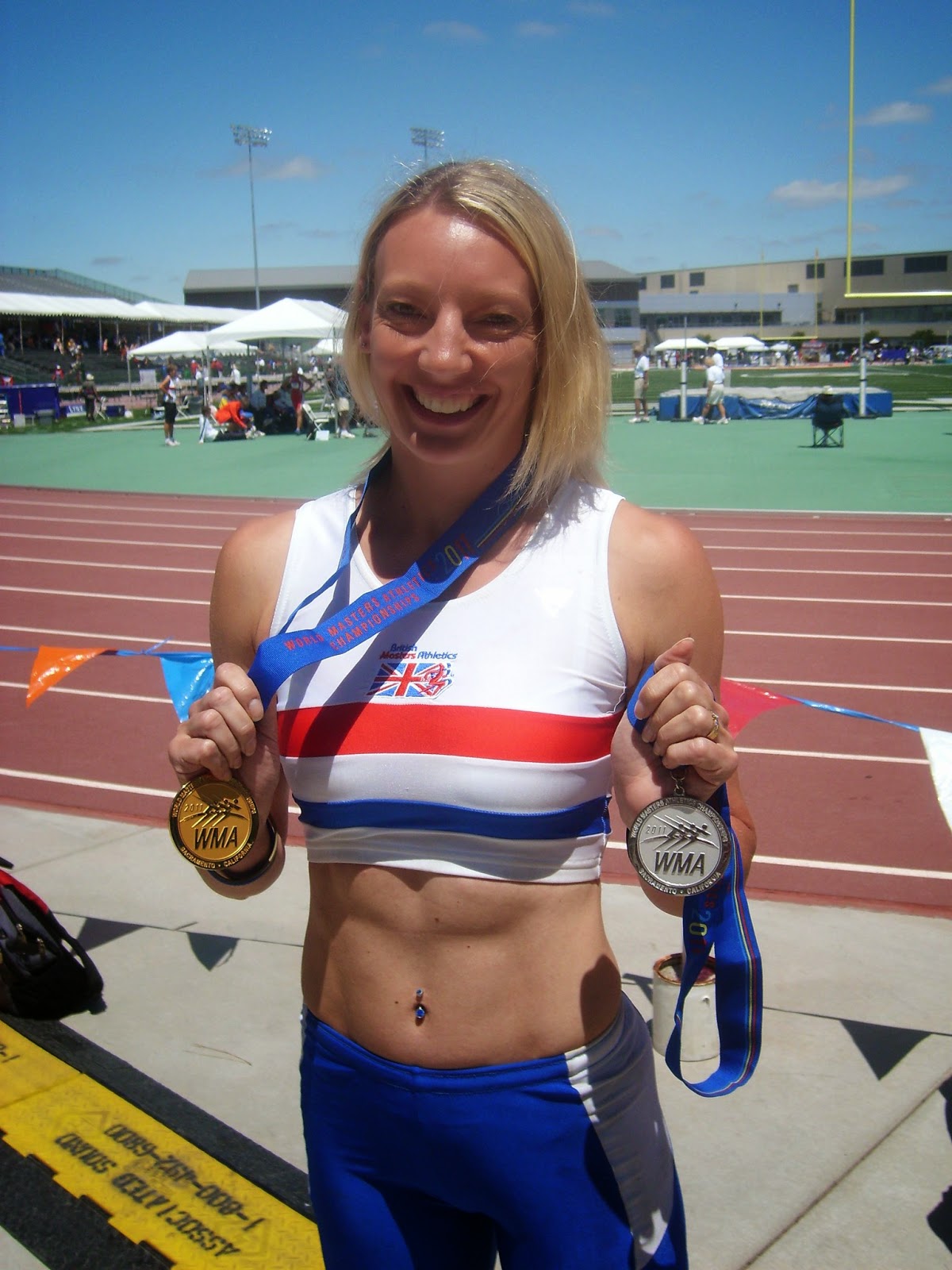 In my first year I entered the British Indoors, I had no expectations or any idea what my times would be like, but I was surprised to find my times were not far off what I did 11 years before when I last raced! I won the British Indoors for 60m and 200m and immediately started planning to compete at the World Champs in California in the Summer.

I arrived in Sacramento again with no expectation, I didn't know any of the other athletes competing, I met so many people, British and international athletes, the trip was full of fun and laughter, but as soon as I started warming up for my 100m heats, I started getting terrible pain in my knees and IT bands tightened up. I thought I might have to pull out it was so bad. I was pretty much in tears on the start line, all that work, all the travelling.. to be in so much pain, but once the gun went off, I did just enough to qualify, but when I crossed the line I realised I had a good chance of a medal in the final. Still in pain, but realising the pain in my knees was referred pain from tight IT bands, I realised I wasn't going to pull anything, it was just going to be sore, so i went back the next day and just went for it...and pulled 12.44- a lifetime best to take the Silver. I was in complete shock! After a rest day, it was back to do the 200m heats, feeling more confident now I knew I was in the best form of my life, I ignored that pain in my knees and again just did enough to qualify and saved my energy for the finals.
The Final I can honestly say this was the best race of my life. I've never felt anything like it. The race was close, with the winner of the 100m also in the final. The gun went off and  I  didn't get off to a great start but I was not giving up. I wanted this win so badly, I was so far behind as I came of the bend, that some people told me after, they actually stopped watching.. and missed me pulling through, fighting for it, pulling each athlete back one at a time. I dipped for the line and my legs were so full of lactic I almost fell over the line, It was too close to call... we started up at the score board ... but it had the names of the next race up by our times.. the race was won in 25.5.... faster than id ever run, but who got it??? In the confusion, the next race was held and we had to wait until after their results come up before they put ours up... It was the longest wait ever and I couldn't actually believe my eyes when the result finally came up and my name was at the top... I was World Champion... with a lifetime best time... an 11 year PB smashed. 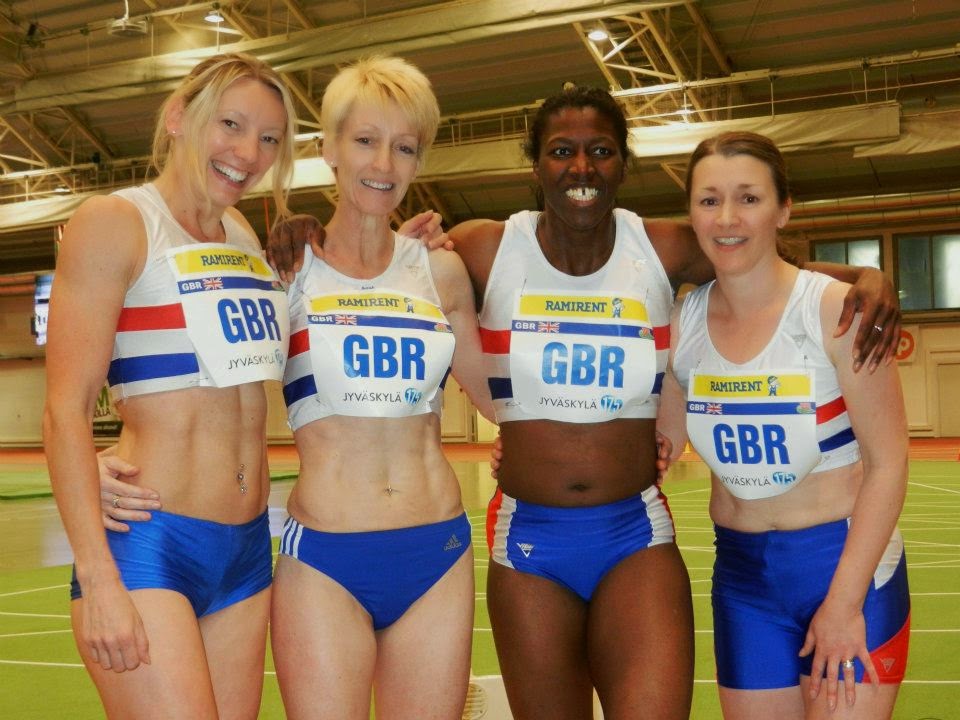 With masters, you compete in 5 year age categories, so each year it gets tougher, until you reach the next age group and move up! I aim to maintain or improve my times, but don't worry about the results as it gets harder each year as new athletes move up.

Here's my results since I started competing. I'm pretty happy with how I've maintained my times fairly consistent, but I would still like to go faster :D 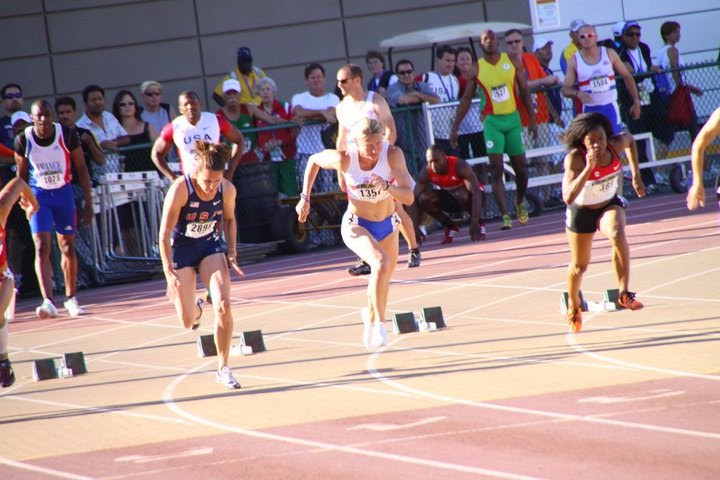 2014, year off athletics, I'm back for 2015 and I'm aiming for Personal Bests!
Follow my blog for training tips, videos etc.!

To information on competing in masters athletics check out their website  http://www.xchangecms.co.uk/